Last Saturday afternoon I was down at the Portland Saturday Market hawking filigree for Laceworks Jewelry, when some street preachers decided to show up and start shouting about God’s wrath and whatnot through a megaphone at all the people sitting down to eat lunch with their families in the food court.

What happened next was priceless, but before I tell you about it I want to give you a sense of what these bigots were banging on about.

This is going to get pretty ugly, so please bear with me. 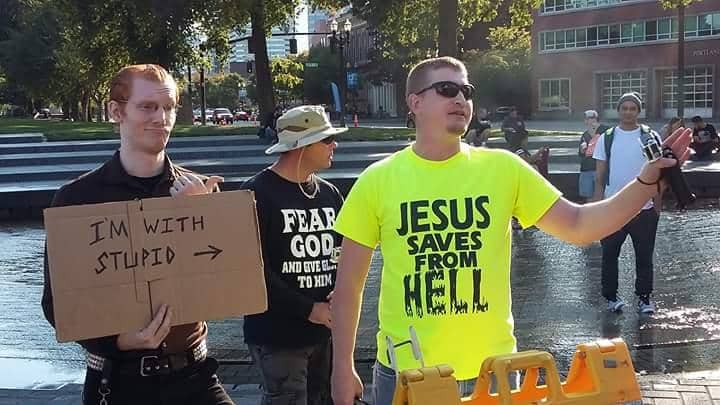 Hello Warriors of the Wasteland,

Last Saturday afternoon I was down at the Portland Saturday Market hawking filigree for Laceworks Jewelry, when some street preachers decided to show up and start shouting about God’s wrath and whatnot through a megaphone at all the people sitting down to eat lunch with their families in the food court.

What happened next was priceless, but before I tell you about it I want to give you a sense of what these bigots were banging on about.

This is going to get pretty ugly, so please bear with me.

Like most street preachers, they were walking fountains of racist, sexist, homophobic gibberish.

In addition to telling anyone who questioned them that they were “going to hell,” (often mixed, interestingly, with a slew of profanity that I’m just certain Jesus would have resorted to when putting women in their place and bashing “the queers”) these charming fellows bellowed some of the following:

I also noticed that he particularly liked using the word “coward” to describe people who challenged him, as he stood hiding behind his megaphone and his Biblical exegeses, his fellow bigots standing tall at his back.

But as tempting as it is to do a psychological profile on this sample of carbon based wastage, I’d prefer not to drag my mind through the darkened corridors where such an exercise would inevitably lead me.

Most folks were trying to ignore these faith-based hooligans, but they obviously weren’t planning to leave any time soon. Some people politely asked them to go away, but of course they wouldn’t. Some people tried arguing with them, but that just made it worse.

So that’s when it hit me… 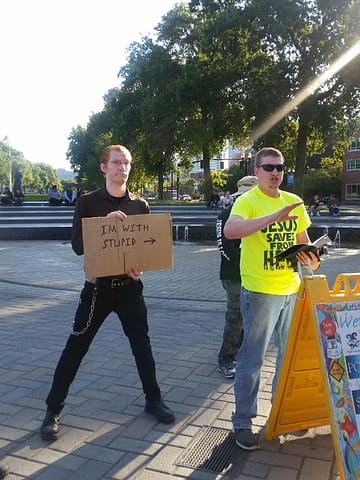 I didn’t say a word to any of them or engage with them in any way—I just stood next to them for a full hour holding my sign, making funny faces, and occasionally gesturing for emphasis.

I received immediate applause from the food court crowd, and people started lining up to take pictures with me and the brainless street preachers.

Some of them were fellow atheists who gave me props for ridiculing the ignorant bigots, while others were Christians who wanted to thank me for taking a stand against what they viewed as a toxic usurpation of their faith.

This is all well and good.

But you know what?

As funny as this is—I’ve gotta admit, it didn’t really stop these dudes.

In fact if anything, they just went on longer because they had a well entertained crowd. Of course, the crowd was laughing at them—and never once did anyone cast a disparaging remark at my actions, but I had two goals in standing up there:

(Notice: convincing the preachers of their ignorance didn’t make the list—they’re already a lost cause.)

I achieved the first part, sure. But I also increased the size and patience of their audience, and as a result the preachers stayed—”doing the Lord’s work.”

In fact at the end, the guy with the megaphone said to me aside, “I’ve gotta hand it to ya, you’re doing a lot better than most,” and then went on to add, “You don’t know it, but you’re doing the work of our Master, too.” 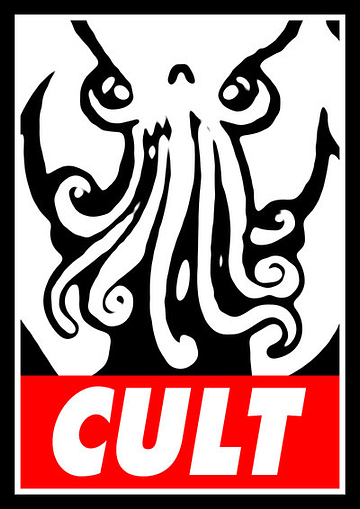 Even as an atheist I’ve gotta say, the hushed way he spoke this to me made me question whether he was talking about the bush burning, child murdering, woman hating god of Iron Age Palestine described in the heavily flawed work of science-fiction known as The Bible, or if he was referring to—SoMeThInG eLsE.

When considering that at no point did a single word out of their mouths actually make a shred of logical sense, I’m pretty sure he was talking about Lord Cthulhu, who has obviously already annexed their cerebral lobes to further his dark agenda.

Of course, he may well have said this to me to try to undermine my sense of triumph at having successfully made a laughing stock of him and his God Posse. But on the other hand, it seems like these guys want attention more than anything else—and sure enough, I gave it to them.

Any publicity is good publicity, right?

And to be fair, though certainly hilarious, my sign was pretty vapid. I mean, they definitely are “stupid,” but their stupidity isn’t the most offensive part of their actions.

So, what’s the alternative? 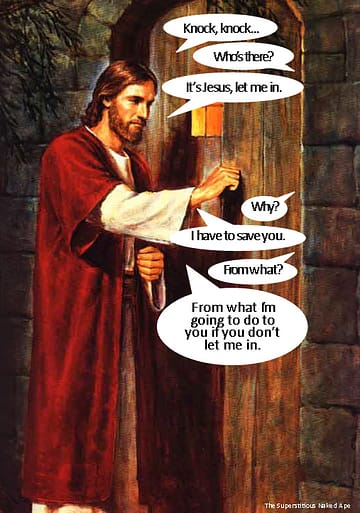 Comic by The Superstitious Naked Ape

Maybe instead of inviting the audience to make fun of the street preachers, I should have made a sign to encourage people to ignore them.

My first idea was that I should get a pith hat, and hold a sign that says “Don’t feed the animals.” Then when anyone would try to engage the preachers, I could just step in and politely ask them to move along. This gives the would-be challenger a joke to lean on so they could leave while still getting the last laugh.

But that would be rather degrading to animals, wouldn’t it? And it’s not any less vapid than my first sign.

Maybe if I start a group at the Saturday Market, we can wear cop hats and stretch caution tape in font of the preachers, holding signs that say “Hate speech in progress.” Then when anyone comes near we can just say in an official tone “Nothing to see here. Please move along.”

Even without props and fellow bigot-bashers, I could make a sign that says “Hate speech in progress—please turn your back in solidarity. Thank you.”

But you know what?

While there certainly lies great value in analyzing the tactics and strategy we use when protesting—the takeaway is this:

Regardless of your approach, protesting ignorance isn’t about edifying bigots, it’s about standing up for the oppressed, and letting others who are appalled by hate speech know that they are not alone.

Protesting ignorance isn’t about edifying bigots, it’s about standing up for the oppressed.

If I have an opportunity to try out some of the above strategies, I’ll let y’all know how they work out.

Until then, stay safe out there.

P.S. The End Times Gazette is now accepting submissions for preacher-trolling slogans. What do you think my next sign should say? Please take a moment to share in the comments.

19 Responses to Special Report: Standing Up to the Bigots