Sorry to disturb you, preoccupied as you surely are with the endless and ultimately futile struggle for existential perpetuation, however I have some news which may come as somewhat of a disappointment.

Science has yet again found evidence that we're killing ourselves off while taking copious other unsuspecting creatures out with us in an apocalyptic "two-for-one" special.

What's the deadly discovery this time around? 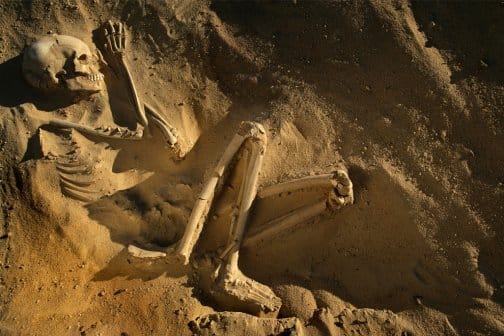 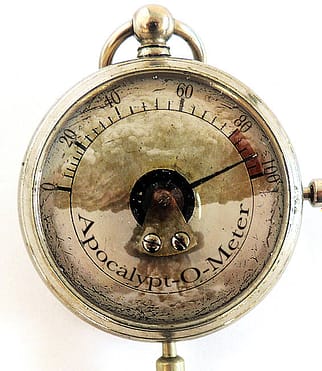 Sorry to disturb you, preoccupied as you surely are with the endless and ultimately futile struggle for existential perpetuation, however I have some news which may come as somewhat of a disappointment.

Science has yet again found evidence that we’re killing ourselves off while taking copious other unsuspecting creatures out with us in an apocalyptic “two-for-one” special.

What’s the deadly discovery this time around?

A good quarter of a billion years ago, Earth was going through one of those ghastly teenage rebellion phases. Though she had acquired a world-class dinosaur collection, she also suffered from a severe bought of volcanic acne. These persistent pyroclastic pustules built up until the pressure on poor Earth’s otherwise lovely face was all but unbearable.

250 billion years ago, Earth was going through one of those ghastly teenage rebellion phases.

Around this time, Earth, who had long fancied Mars’ fine rubicund figure, plucked up her planetary courage and asked him to swing by and checkout her dinosaur collection. Yet what was her indignation when he replied that he would be visiting Venus that day!

You may recall that unlucky time when Earth got hit with a stray meteorite during a game of dodge-ball with Mercury and Saturn—but I assure you this was far more egregious. After Mars cast her off so discourteously, Earth’s anger rose so hot and fast that her acne ruptured all at once, and in a blind rage she stormed home and smashed to smithereens her beautiful dinosaur collection.

…Or at least, that’s the way I seem to recall the tale—but my memory is rarely lauded for its pristine accuracy.

As some less imaginative sources prefer to tell it, an inordinate number of volcanoes erupted within the breadth of a few thousand years—a mere eye-blink when measured on a geological scale—slathering the atmosphere in heaps of carbon dioxide. But of course what goes up must come down, and all that CO2 turned into acid rain, in turn spiking ocean acidification to catastrophic levels.

As a result, 90% of sea creatures and two-thirds of land animals on the stage of history got the shepherd’s crook.

Consider it the series Reboot for Planet Earth. 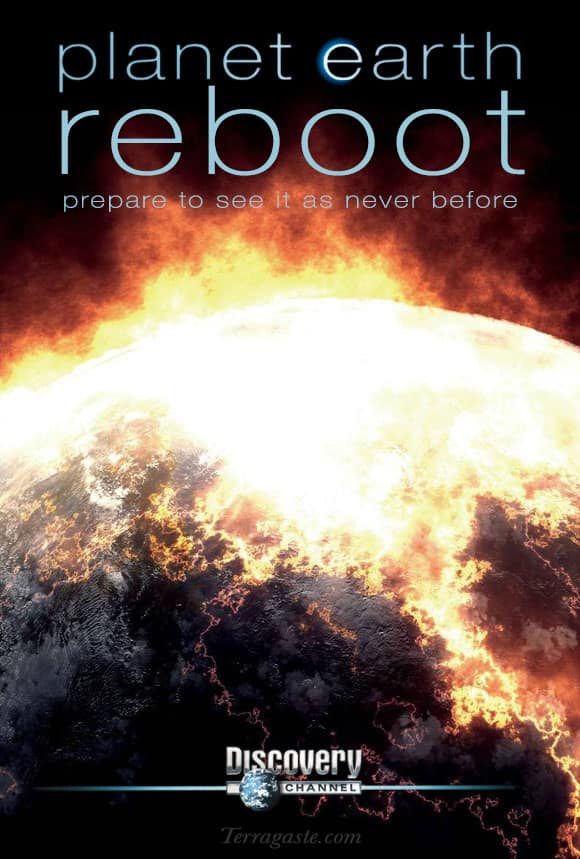 Permian Triassic Boundary Extinction: think of it as the series reboot for Planet Earth.

These days that event is known as the Permian-Triassic Boundary Extinction, which is the scientific approximation of the lay phrase, “That time when pretty much everything fucking died.” Other folks simply call it “The Great Dying,” which I should think gets the point across just as well.

However, by now you’re probably asking yourself, “What does this 250 million year old Debbie Downer have to do with me?”

Well, you may want to sit down for this one.

Turns out, it’s happening all over again.

But this time around, it’s not a bunch of volcanoes causing it. It’s a bunch of semi-evolved monkeys with a petrol fetish. 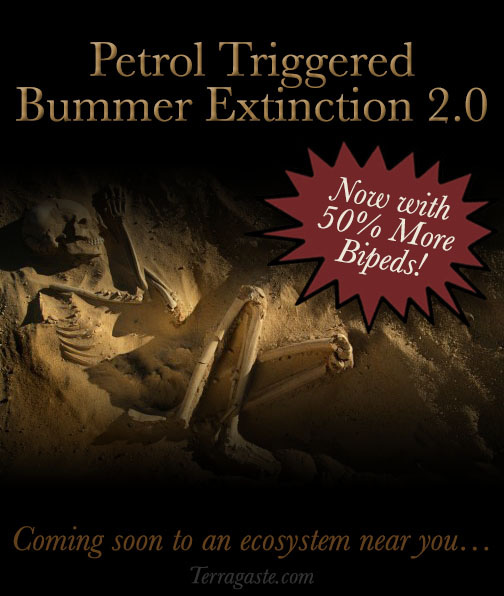 According to a recent study, it wasn’t so much the volcanic fireworks as the subsequent spike in ocean acidification that did everyone in. And that kind of rapid acidification is happening again today as a result of human generated carbon emissions.

So even though the amount of carbon we’ve added to the atmosphere hasn’t reached “Great Dying” levels—yet—ocean acidification is currently increasing at about the same rate, which more or less sums up that whole “disappointing bit” I mentioned earlier.

In short, we are currently destroying our oceans at a rate equaling the single greatest mass extinction in the geological history of the world.

Modern science has shown us not only that mass extinctions have occurred repeatedly in the past, but also that we’re currently in the middle of one—and more alarmingly, that we are the petrol-powered driving force behind it.

And let’s face it. With literally dozens of species already going extinct every day—don’t you think it’s a bit arrogant to assume we can’t possibly become one of them?

With dozens of species going extinct daily—isn’t it arrogant to assume we can’t become one of them?

How long do you think humanity will last?

Be sure to let us know in the comments.

8 Responses to Are Humans Engineering the Next Mass Extinction?